Dental History, from the past to the modern 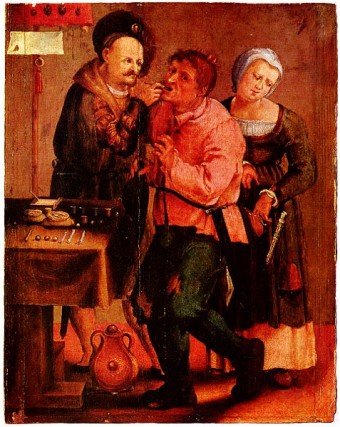 Brushing your teeth after every meal, visiting the  dentist for cleanings, and having a relatively painless mouth is not just  desired but expected in the year 2012. However, that was not always the case.  Dentistry has come a long way since its inception and is often overlooked for  other scientific advancements.  Dental history is important.

The earliest history of treating tooth related problems goes all the way back  to 7000 BC, where the Indus Valley Civilization shows evidence of treating the  mouth for tooth decay. The first method of treatment was bow drills, which were  ancient primitive tools used for woodworking and treating tooth problems.

Moving forward into 5000 BC, the Sumerians blamed tooth worms as the cause of  any dental issues, with the worms boring little holes in your teeth and hiding  out inside. (Reportedly some ancient doctors even mistook nerves as tooth worms  and tried to yank them out.  Ouch!)   The idea that a worm  traveled through your mouth and was the cause of dental pain lasted until it was  proven false in the 1700s. (Yes, you read that right, the 1700s).

In ancient Greece, Hippocrates and Aristotle wrote about treating decayed  teeth as well as having teeth extracted to keep mouth pain away. The concept of  having a tooth extracted from the mouth through using forceps was often used to  treat many diseases into the middle ages.

Interestingly enough, the professionals who were doing these extractions  during the middle ages were not medical authorities, but barbers. These  partially trained hair cutters began using a “Dental Pelican” in the 14th  century and then a “Dental Key” to extract teeth from their patients’ mouths.  Both of these tools were similar to and the precursor to modern day forceps.  These barbers were not full time dentists, but in fact, their work was focused  solely on removing any infected teeth for alleviating pain purposes, not  preventive care.

It was between 1650 and 1800 that the concepts behind what we now think of as  dentistry got its start. The man behind the science was 17th century French  Physician, Pierre Fauchard. He is called “The Father of Modern Dentistry”, and  he was the brains behind many of the procedures still used in today’s society.  For instance, he was the man behind the thought process for dental fillings, and  he also helped to explain that acids from sugar are a major source of tooth  decay.

From here, the rest is history. In 1840, the first dental college was opened,  called the Baltimore College of Dental Surgery. This led to more government  oversight, and eventually regulation through the American Dental Association  (ADA).

Surprisingly, most Americans did not pick up on the dental trend to brush  their teeth until after World War II. The soldiers stationed abroad brought the  concept of good dental health back to the states. Now, most Americans not only  focus on the health aspects of keeping their teeth clean, but many are just as  concerned with the cosmetic appearance as well. Times have changed!

This is a guest post by Shoshana Davis, a freelance  contributor for TopDentists.com, the dental resource site of Everyday Health.